INTRODUCING ‘MIGHTY’ JOE Ward, who you might say is ‘one to watch’ in boxing’s punch-for-pay ranks.

Of course, the idea of Ward being merely a prospect is a bit weird.

His personal honour roll is of such a magnitude that if the Moate man was to step away from the sport altogether, he’d still rank among Ireland’s greatest ever sportspeople before his 26th birthday.

Three European Championship gold medals. Two silver and a bronze at the Worlds as a Senior; gold at the Worlds as both a Youth and a Junior. And a reign as Ireland’s premier light-heavyweight — and arguably Ireland’s most prodigious male boxing talent — since he ended Ken Egan’s own decade-spanning period of dominance aged 17.

Those landmark achievements, and less so the plethora of other honours in the eight intervening years, have the odd time propelled Ward to the top of the Irish sports agenda, on those seldom-seen days during which boxing — scarcely and understandably not everyone’s cuppa — enters the mainstream consciousness in Ireland for the right reasons.

Most people in the country know Joe Ward — ‘the boxer; he’s very good, all right’ — but comparably few have witnessed the moments which compose the all-time great legacy he leaves behind, along with his amateur vest and the burgeoning Irish team he captained to within a year of the 2020 Olympics.

Those interested will hopefully get to see him reach the pinnacle of his new pursuit. 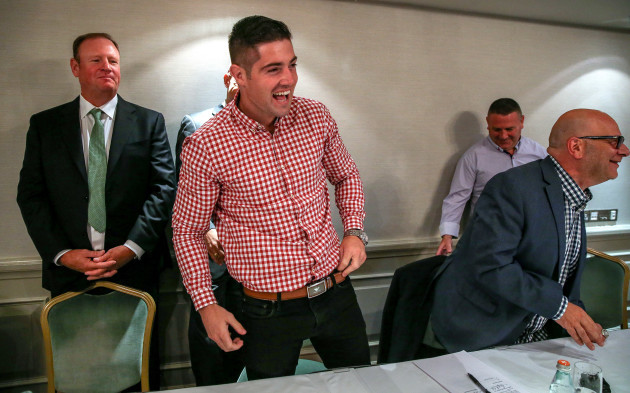 It was only after Thursday’s press conference in Dublin’s Westbury Hotel that Ward’s move to the pro game was signed and sealed — literally.

To the snapping of cameras and the rush of journalists hungry for #content, Ward put pen to paper at the top table, his promoter Lou DiBella duly following suit.

After their warm embrace and a “good luck” from the New Yorker, Ward piped up: “Where’s the money?”

Cue hearty laughs, and DiBella’s swift response that it would be ‘wired’ to Ward in due course.

It was an acknowledgement from both that the industry within which they operate — DiBella for 30 years longer than Ward — is pure muck at its worst, and is rarely at its best.

But amateur boxing is, incredibly, even worse, which is a large part of the answer as to why a year out from Tokyo, Ward had decided to abandon his legitimate chance of a medal in pursuit of different glories and different gold.

“Lookit, it’s been a very difficult [decision] for me to make,” he said. “It’s been a long time coming. A lot of people expected me to go pro after London [2012], or maybe after Rio [2016], but I stuck around because I always wanted the right team around me — to meet the right people. Because, as we know, in boxing, we have a short enough career, so we’ve got to make the right decisions. And when I met Joe [Winters, manager] a few months ago, we clicked straight away: he had a vision, I had a vision on what we wanted to do.

“But also, I had an amateur career that I look back on which was very successful. I’m grateful for the opportunities I was given in the amateur game, but I think it’s a new chapter for me now; I think it’s time for me to move on.

I’m really looking forward to it. It was always going to be a very difficult situation and decision for me to make. I felt like this was the right time for me to go. As you know, I’ve been in Multi-Nations [tournaments] previously and there’s no guarantees I would have been Olympic medalist. 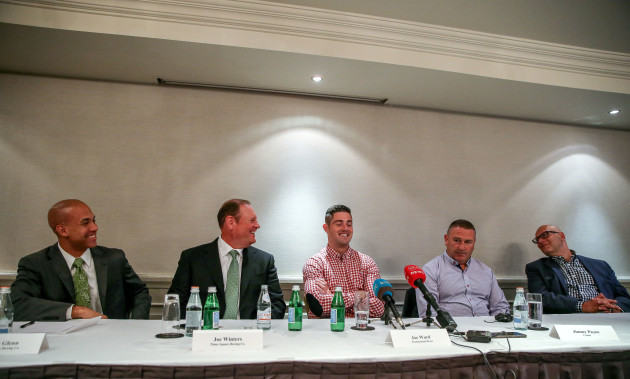 The answer to the other pressing questions are as follows: Ward will campaign as a light-heavyweight — at least to begin with — and he’ll debut over six rounds in October, either in Boston or New York.

He will be trained by former world champion and boxing Hall of Famer Buddy McGirt alongside revered Irish coach Jimmy Payne, who has worked with several inter-county hurling teams as well as Ward himself since childhood.

Ward will train on either side of the Atlantic but McGirt — who also trains Russian light-heavyweight star Sergey Kovalev [33-3-1, 28KOs] — is “all in”, and will be omnipresent during pre-fight camps.

As had already been confirmed, he will be managed by Times Square Boxing, a New York-based outfit consisting of multi-millionaire Long Island businessman Joe Winters and lawyer-turned-boxing-manager Adam Glenn — the latter the son of New York boxing icon Jimmy Glenn.

Along with DiBella, Ward will be co-promoted by Ken Casey, the lead singer of Irish-American punk band Dropkick Murphys, whose Murphys Boxing enterprise has become the preeminent promotional presence in New England.

Ward himself likes the nickname ‘Mighty Joe’. If that doesn’t stick, he’s open to an even more on-the-nose suggestion made famous by an Irish-American boxing great from Casey’s neck of the woods.

“‘Irish Joe’ is another one, especially after Micky Ward,” said the southpaw, cognisant that he’ll doubtless trade leather in some of Ward’s old haunts over the next couple of years.

Said DiBella: “I did promote ‘Irish’ Mickey Ward — one of my favourite guys in boxing. He (Joe Ward) will absolutely spend a little time with Mickey.”

The 59-year-old Brooklynite added of career blueprint for his prized Irish recruit:

“There is no pressure to be placed on him in terms of his progression. His progression is going to be what Joe himself, and his trainers, agree what is appropriate.

“There’s not going to be any 2-42s,” DiBella continued, dismissing the notion that Ward will be fed a few soft-touch opponents to kickstart his professional journey.

“None. Zero. And there’s not going to be any 3-10s. There’s no need. That doesn’t mean he’s going to start with King Kong. He won’t. He still needs to get used to the professional game.

But you don’t get better by doing that (fighting opponents with losing records). You build a record that way. I could make a ham sandwich 15-0, but Joe’s not a ham sandwich. I want to see a steady development, and his second opponent will be better than his first, and his fourth opponent will be better than his second. That’s the nature of developing fighters the right way.

I’ve been doing this for 30 years. I’m pretty good at it. I don’t think he’s more than three years away from being in title contention. But there’s no set time for him. I would believe he could be a world-ranked light-heavyweight in two years, based on what I’ve seen.

I’m thrilled to work with him. We sealed the deal in New York — we had dinner, and we spent an evening just chatting, and I bought that table committed to getting a deal done with Joe. Because I think not only does he have the ability to be champion, he has the ability to be the face of boxing — to be something like Katie Taylor is in the women’s game. 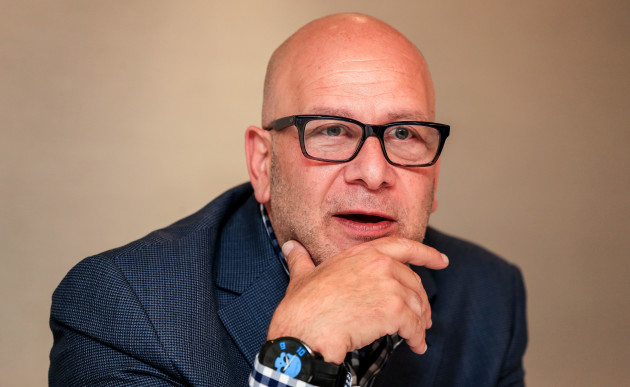 There was at times an almost apologetic tone to the words of Winters and Glenn, sat to DiBella and Ward’s right, both of them acutely aware of what an Olympic medal means to Irish sport and acutely aware, too, that Ward’s big move chalks off arguably Ireland’s best medal chance next summer.

Glenn, for example, stressed that “this was not an easy decision at all for him, and we really respected the fact that he had to think about he because he cares about the [Irish] team; he cared about mentoring the younger fighters on the team. 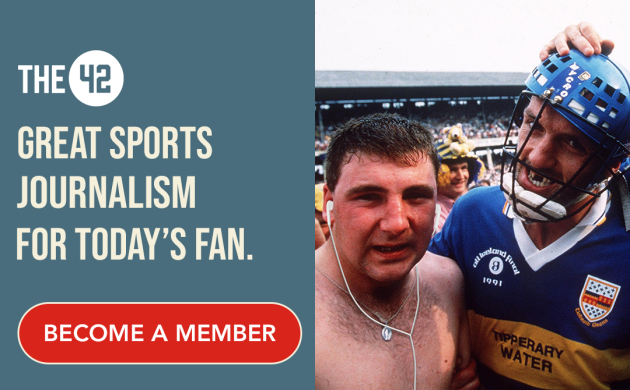 DiBella, though he has a steep Irish-boxing connection having promoted the likes of Andy Lee, Matthew Macklin and Patrick Hyland in the past, was dismissive of anyone sceptical of Ward’s decision to turn over three years into an Olympic cycle.

“I’m a little bit less politically correct than my friends on the table, here,” he said.

Amateur boxing has been a mafia, basically; it’s been corrupt. That’s the truth. We didn’t even know six months ago that there would be boxing in the Olympics — literally. And who’s running amateur boxing right now? And if you go and if you lose — unfairly — you’ve given up two years of your life.

“Well, not really. You have to get out of the Olympics, sign a contract which takes a while… I mean, literally, it took a while once Joe made his decision to get moving and start his career.

Look what happened to [Michael] Conlan in the Olympic Games. And the pro style which [Ward] clearly has — it’s not exactly rewarded in the Olympics.

“And I didn’t pressure him at all. I didn’t have one conversation with Joe encouraging him to turn pro, even though I think that he should have. And, frankly, I believe that any amateur boxer right now with a pro style, who aspires to be a professional, shouldn’t count on the Olympics as a stepping stone to a future. Because if you look at amateur boxing, you look at the scoring, you look at who the people are that have run Olympic boxing in recent years… I’m a little bit surprised with the level of criticism that some people have [regarding Ward’s decision], because it appears to me that those people aren’t really taking a good look at the way the Olympics — in boxing — has been run over the last decade or so, because there’s a long and storied history of unfairness.

Joe’s first obligation is to himself and his family. If he wants to be a professional, if he wants to be a champion; he’s 25 years old — he’s not a 20-year-old kid; I think he made a very intelligent and reasoned decision and he did exactly what I would have advised him to do. But once again, no one pressured him into doing anything — he made the decision for himself and his family.

“I want to clarify with you real quickly,” he later added with a smile. “When I said the term ‘mafia’, I didn’t mean it literally. I meant it figuratively — as in a corrupt enterprise. Not literally as the mafia.

“I gotta be careful — my name is DiBella!” 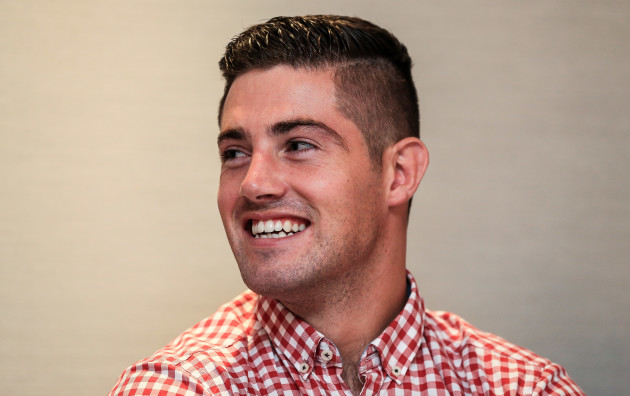 Joe Ward will likely debut in either New York or Boston in October.Source: Gary Carr/INPHO

Ward, content to leave DiBella and his management do most of the yapping in Dublin, won’t be bucking that trend any time soon.

Since he rose to semi-prominence eight years ago, the softly spoken Moate man has famously put his footwork to good use outside of the ring as well as within it, an artful dodger of interviews as well as jabs, hooks and uppercuts.

He has conspicuously grown in confidence as a chatter since being named Irish captain by IABA High Performance Director Bernard Dunne two years ago but his fists, and not his words, will remain his weapon of choice on this new venture.

But at the same time, don’t come at him with any guff.

“I think my talent and who I am, and what way I come across — I think, obviously, I’ve got a big fanbase — I think I’ll speak honestly,” he said.

I’ll just be genuine, and I think people can see through me and see I’m a nice guy, a genuine guy, who loves the sport of boxing and wants to be successful for my country, for my family, and for everyone involved. And I don’t think I’ll have to change too much, no.

“We’re fighters — we all have a bit of nastiness in us. But I try to keep it in as much as I can.

“Lookit, I could go out and talk crap or whatever way you want to put it, or I could be just a normal nice guy. But for me, it’s just about being myself.

“If the opportunity [arose] and I had to change myself a little bit, then why wouldn’t I?” he continued with a smile. “If you piss me off, then we’ll go down a different route.”